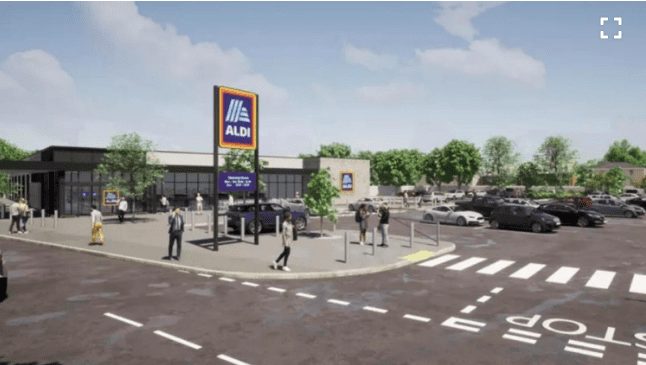 New ALDI supermarket approved for Cootehill and expected to open in the middle of next year.

The retailer was granted permission for the development, planned for a site along Station Road and Market Street, last week.

An application was lodged with Cavan County Council last March but it’s taken until now for a decision due to a request for further planning to be carried out.

Revised designs for the approach road to the store and the provision of cycling and walking infrastructure were requested. Irish Water also highlighted the presence of wastewater infrastructure through the site, which requires works to divert pipes.

Development Consultants John Spain Associates, working on behalf of Aldi, later requested an extension to allow time for revised drawings to be prepared.

Sixty jobs are expected to be created during the construction phase of the €6.5 million development, with up to 25 jobs in the store itself.

Aldi hasn’t said when it expects construction at the site to begin but does say it hopes to open the supermarket by mid-2023.

The new store will cover 1,315 sqm, with parking facilities for 93 cars and 10 bicycles. Under the plans it will also be powered by 100% green electricity and will feature four electric vehicle (EV) charging points outside. The store itself will be constructed in Aldi’s award-winning Project Fresh design.

“We have been planning to open in Cootehill for some time now so we are delighted to get the green light from Cavan County Council. We look forward to bringing our amazing prices to even more customers through this store.

The new store will also provide further opportunity for local food and drink producers to work with Aldi. We sourced over €700,000 of locally produced food and drink from Cavan based suppliers last year.”

One submission was made on the plans, from representatives for the RGDATA retail group, which represents independent family grocers across the country.

Among the issues raised in its submission it said there is a high level of commercial vacancy in Cootehill and the redevelopment of one of those sites should be incorporated into the plans.

It also said the development is considered contrary to the Cavan Retail Strategy, which prioritises the reuse of vacant buildings.

Following the submission of the further information, Stephen Ward Town Planning and Development Consultants, acting on behalf of RGDATA, said the content of the original submission had not been addressed by the revised plans.

It highlighted the need for “a much better relationship between the proposed development and Market Street and the remainder of the town core”, again pointing to the refurbishment of vacant town buildings.