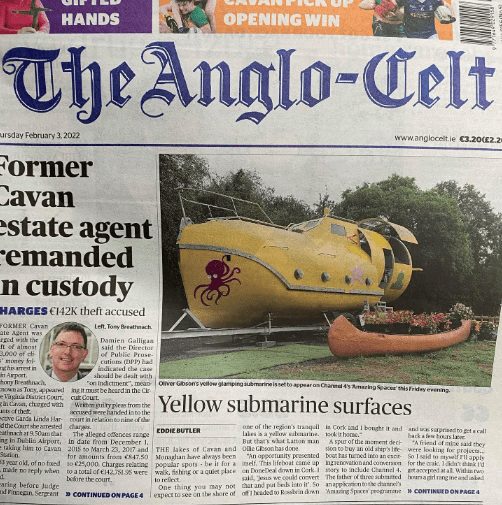 The lakes of Cavan and Monaghan have always been popular spots – be it for a walk, fishing or a quiet place to reflect.

One thing you may not expect to see on the shore of one of the region’s tranquil lakes is a yellow submarine. But that’s what Latton man Ollie Gibson has done.

“An opportunity presented itself. This lifeboat came up on DoneDeal down in Cork. I said, ‘Jesus we could convert that and put beds into it’. So off I headed to Rossbrin down in Cork and I bought it and took it home.”

A spur of the moment decision to buy an old ship’s lifeboat has turned into an exciting renovation and conversion story to include Channel 4. The father of three submitted an application to the channel’s ‘Amazing Spaces’ programme and was surprised to get a call back a few hours later.

“A friend of mine said they were looking for projects… So I said to myself I’ll apply for the craic. I didn’t think I’d get accepted at all. Within two hours a girl rang me and asked me more questions. We went through two stages of casting and then found out in late March that we were going to be in the new series.”

Some careful planning, including a redesign to avoid any possible copyright claim from a well known 1960s band, saw work take place across last summer. 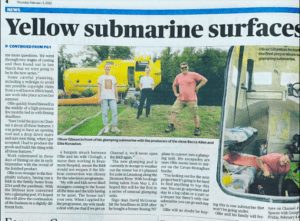 Ollie quickly found himself in the middle of a high-pressure few months tied in with filming deadlines.

“Sure I told the guys on Channel 4 about all these features. I was going to have an opening roof and a drop down stairs and sure next thing, when I got accepted, I had to produce the goods and build this thing with all these features.”

Work culminated in three days of filming on site in early September with the reveal of the finished product.

Ollie is no stranger to the hospitality industry, having run a B&B in the family home from 2014 until the pandemic. With the lifeboat now converted into a glamping pod, it’s hoped this will allow the continuation of the business in a slightly different form.

A bargain struck between Ollie and his wife Clodagh, a nurse then working in Beaumont Hospital, meant the B&B would not reopen if the lifeboat conversion was chosen for the television programme.

“My wife and kids never liked strangers coming to the house all the time and the kids having to be quiet. The house isn’t your own. When I applied for the programme, my wife made a deal with me that if we get on Channel 4, we’ll never open the B&B again.”

The new glamping pod is currently in storage to weather out the winter but it’s planned for a site in Lisnalong along the Dromore River. With bookings being taken from May 1, it’s hoped this will be the first in a series of unusual glamping units.

Sligo man David McGowan hit the headlines in 2018 after he bought a former Boeing 767 plane to convert into a glamping unit. His escapades are ones Ollie seems keen to mirror on the Cavan-Monaghan border.

“I’m looking out for the next project but it’s going to be hard to find anything to top this one. You can go anywhere and stay in a log cabin or a yurt or a teepee but there’s only one submarine you can go and stay in.”

Ollie will no doubt be hoping this is one submarine that won’t be going under.

Ollie and his family will feature on Channel 4’s Amazing Spaces with George Clarke this evening Friday, February 4 at 8pm.

BY Eddie Butler in the Anglo Celt
https://www.anglocelt.ie/2022/02/03/yellow-submarine-surfaces/