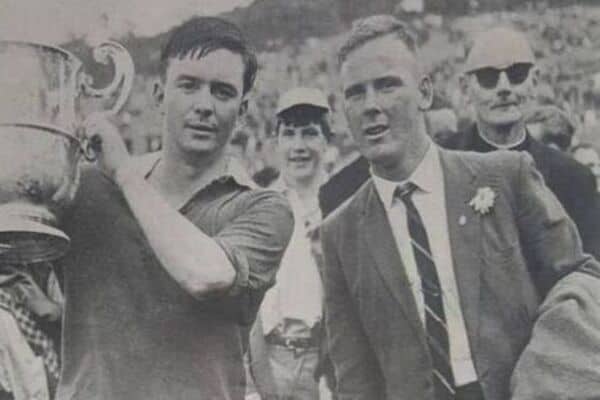 When asked to describe the protagonist of his new book, Paul Fitzpatrick labels Charlie Gallagher as “the George Best of Gaelic football.”

Gallagher was the darling of the sport in the latter half of the 1950s and throughout the 1960s. Paul’s biography Charlie: The Story of Charlie Gallagher, the GAA’s Lost Icon tells his story.

“It’s sad and strange that people outside of Cavan don’t know much about him because back in the 1960s he was a household name,” says Paul. “He was the leading scorer for three years in that decade, he won four Ulster titles, he won four Railway Cup medals – one as captain – and he was regularly in the national media at the time.”

Hailing from the town of Cootehill in Co Cavan, Gallagher’s scoring ability and all-round play from corner forward earned him a place in the folklore. When listening to Paul speak about him, it’s hard not to draw comparisons to the fanfare that surrounds the likes of David Clifford nowadays:

With Charlie, it wasn’t just his skills on the pitch that inspired his legend. He had everything – charisma, looks, kindness and a way with people.

“Charlie used to drive a sports star and he would arrive into Cootehill on a Friday evening coming from Derry [where he worked as a dentist]. Word would get out that Charlie was on his way, and people would actually gather on the sides of the street.

“Lots of people I talked to remember this. Crowds of 30-40 people would line up to see Charlie come into town. He’d wave to them and he’d stop, and he’d always have a one-liner.

“He was like Jack Nicholson. They say if you ever meet Jack Nicholson he always has a one-liner. Everyone has a Jack Nicholson story, I think everyone had their own Charlie Gallagher story. He was unbelivably quick and witty. I think he was like the little boy who never grew up.”

Unfortunately for Gallagher, his time with Cavan coincided with the start of their decline as a footballing county. His early years with Cavan brought with them the longest provincial drought for the county since 1915. After debuting in late 1955 it would be 1962 before he won his first Ulster medal, captaining the side in the process. He would win three more provincial titles but never managed to reach an All-Ireland final.

“I honestly believe that if he had to have gotten an All-Ireland he would have been in the GAA’s ‘Team of the Century,'” says Paul.

Yet, like George Best, Charlie also had his own battles off the field.

His struggles with alcoholism intensified in the years after his retirement. Working as a dentist in Derry, Gallagher couldn’t escape the impact of The Troubles. At one point his wife was held hostage. On another occasion a rumour went around that he had been assassinated:

However, his legend lived on well after his death. Former Meath manager Sean Boylan was one of the many people Paul spoke to about Charlie. Boylan spent many of his schooldays in Dublin fetching balls for Gallagher when he’d be out practicing frees:

“On a Wednesday the kids would be brought out to play football and hurling, and the teacher was Jim McCabe who had played on the Cavan senior team in 1952 … Charlie was in UCD and on a Wednesday afternoon he’d come down to the pitch and Jim McCabe and Charlie would go through an hour and a half of practice.

“Sean Boylan said that it had a massive impact on how he would train teams over the years. When he watched Charlie in action, he was known as someone who wouldn’t be a great man to train, in the sense that he wouldn’t just run laps or that sort of stuff but he was deadly serious when it came to practicing his frees, his sprints and stuff like that.

“Boylan said that he often told Meath players of what he learned from watching Charlie practice. It was pure repetition and he was renowned as the best free taker in the country.”